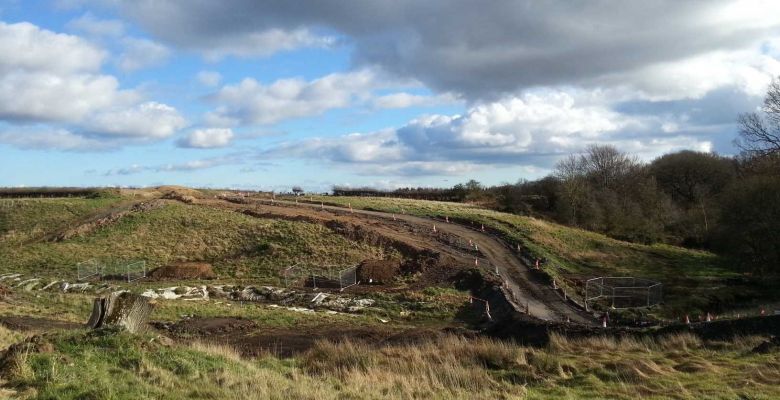 Morpeth, the county town of Northumberland, is a gateway to many towns and historic and natural attractions across Northumberland. With just one main route through Morpeth and an increasing population, there has been a marked rise in congestion within the town in recent years, often resulting in gridlock. The construction of the Bypass not only relieves the rush hour traffic, it also opens the area to increased business development, economic regeneration and potential inward investment.

Carillion Civil Engineering Ltd., on behalf of Northumberland County Council, have constructed the bypass, a 3.8km long single carriageway road extending from Whorral Bank Roundabout on the A197 north east of Morpeth, westward to the A1 trunk road where a new interchange has been created to ease access to the A1. The project involved the construction of four road junctions, two bridge structures, two underpasses, and one mammal tunnel along the route of the bypass. Furthermore, the scheme also consists of attenuation ponds, landscaping works and habitat creation.

EcoNorth was asked to join the project team undertaking the construction of the new road as the Project Ecologist and Ecological Clerk of Works (ECoW). Initially the role involved undertaking a range of pre-construction protected species surveys, notably for badger, water vole and breeding birds, as well as assisting with the installation of ecological mitigation as per the EPSML (European Protected Species Mitigation Licence) conditions. The prescribed mitigation included the clearing of vegetation on the banks of the burns to displace water vole and installing bat boxes prior to the demolition of structures with confirmed bat roosts.

Once construction began in March 2015, EcoNorth were tasked with ensuring the conditions within Construction Ecological Management Plan (CEcMP or sometimes known as the Construction Environmental Management Plan, CEMP) were adhered to. This required a vigilant presence on site, undertaking regular monitoring visits and searches for protected and notable species on site.

The site monitoring also included the undertaking of environmental sampling of several watercourses that flowed through and adjacent to site. Regular monitoring visits were essential to identify any potential hazards to watercourses, such as toxic pollutants and sediments. If any potential hazards were identified, the site ecologists worked proactively with the site teams and management to address the sources, reducing or negating the risks of incident to both the environment and the client.

Regular inspections and assessments prior to the commencement of works in new areas were continuously undertaken and if no constraints were present, works would be undertaken under a permit system that site teams strictly adhered to. In instances where constraints were discovered, such as breeding birds within vegetation, or even within site plant/machinery, EcoNorth worked collaboratively and pragmatically with site teams to find solutions and implement mitigation; this helped to minimise any potential delays whilst always ensuring compliance with environmental and wildlife legislation.

EcoNorth provided a well-managed and professional service, using local knowledge and expertise to help deliver the project successfully. EcoNorth fully integrated with the Carillion team allowing for a strong collaborative approach to not only fulfil the requirements of the CEcMP, but to go over and above by implementing additional features where possible; an example of this was using cleared vegetation from site to create temporary bat crossings, habitats and shelters (hibernacula) across site. EcoNorth also contributed to Carillion’s community goals, taking part in litter picks of local green spaces and running ‘bat walks’ for a local primary school.

All this hard work won and added value was national recognised at CIRIA’s 2016  BIG Biodiversity Challenge Awards with EcoNorth and Carillion joint winners of the Community Engagement  for its Education Hub. The hub is both a virtual and physical classroom where the site ecological enhancements and mitigation are used to educate on the importance of biodiversity on a larger scale and its impact locally.

“EcoNorth provided Carillion with expert advice and guidance on all wildlife related matters throughout the construction of the Morpeth Northern Bypass project. Their friendly pragmatic approach enabled them to become one of the team during the ECoW role, whilst their passion for wildlife enthused the construction team and the local community we were working in. It was great to be nationally recognised for our virtual education hub at the Big Biodiversity Awards, and celebrate a great partnership. I only hope we can find a new project to work together on again!”