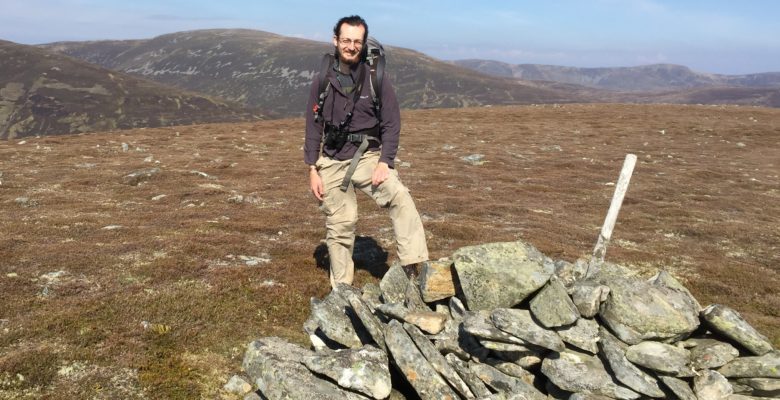 Following the introduction of our ‘Meet the Team’ page comes our mini blog series.  Each week, hear personally from our team members about their roles at EcoNorth and more.  This week, meet Ben, our Assistant Ecologist.

I’m originally from the Midlands but came to Newcastle for university and never really left.  Coming from the flat area around Northamptonshire and Cambridgeshire, I fell in love with the hills and coastline of Northumberland.

I enjoy spending time outdoors, particularly when kayaking, canoeing and hiking.  I surf occasionally and I’m a trained and experienced scuba diver.  I’ve discovered an interest in photography this year, though I’m still very much a novice.

Summarise your role at EcoNorth

I have been an Assistant Ecologist at EcoNorth for the last fourteen months.  During much of this time, I have been outdoors completing fieldwork.  The work has varied from sitting out late into the evening carrying out bat surveys, to setting up traps in ponds for newt surveys or simply being out on site identifying plants and habitats.  I have also conducted numerous upland bird transect surveys and spent a couple of days searching watercourses for signs of water vole.  Recently I carried out aquatic surveys assessing fish suitability and macro invertebrate surveys, which was a first.  Naturally,  all of this has been followed with office work, including writing up reports, producing GIS maps and general project management.

My role can be really diverse.  I’ve worked all across the North of England and up into Scotland, as well as travelling over to Ireland.  I’ve conducted surveys on a wide range of species and massively expanded my identification skills, particularly in botany and ornithology.  The range of projects has also been significant, from small private residences to large scale infrastructure projects.

What got you into Ecology?

I’ve always been drawn to wildlife and nature; I grew up in a rural far,ing area surrounded by wildlife and we had a number of pets throughout my childhood.  I enjoyed learning biology at school, and inevitably went on to study it at university, specialising in zoology and taking a large number of ecology modules.  I stayed on to gain a Masters in Ecological Consultancy and began working as a subcontractor, assisting on protected species surveys.

What do you like most about working as an Ecological Consultant?

I think it’s true of almost every Ecological Consultant that I’ve worked with or met that they have a passion for the fieldwork and that’s very much true for me as well.

I have a very broad interest across the field of ecology.  I appreciate the many opportunities to conduct surveys, whether it’s plants, reptiles, birds, water voles, otter, badger or bats.  I love the diversity of species I can work with and that we spend so much time outdoors.

Describe the project you have worked on that you are proudest of.  What did you do that worked out particularly well?

I have worked on a large number of projects over the past fourteen months and many of them are still ongoing, so it is hard to single out one particular project.  The projects that I enjoy most and am especially proud of are the large scale ones where we work on a varied range of species.  These projects potentially can have a significant impact on the local wildlife, so it is really important to carry out thorough surveys to inform and mitigate them.  These projects tend to involve a lot of work, working long days and nights, but it can be satisfying to get a bigger picture of the local ecology.

What do you see for the future?

Due to climate change and the ongoing ecological crisis, there will continue to be large scale biodiversity losses and the mitigation and compensation measures that we advise and implement will become ever more important.  However, with the growing awareness of the issues we face and more environmental legislation coming into effect, hopefully we can continue to work with developers, local planning authorities and conservation groups to mitigate and compensate for the detrimental impacts to the environment effectively.

On a more personal note, I am working on expanding my skillset and experience as an Ecologist.  I recently received a Class 1 survey licence for Great Crested Newts and became a qualifying member of CIEEM.  Now I am working towards my Bats Class 1 survey licence.  I am involved in several winter bird surveys at this time, which is helping to expand my ornithological skills.  As spring comes back around, I will be focusing on my botany identification skills.

Finally, what advice would you give to anyone starting out?

Gaining practical experience in general surveying is key.  There are all sorts of conservation projects for which you can volunteer to gain this experience.  I took part in a cetacean survey and hedgehog survey and there are many other projects in the North East requiring surveys such as water vole and pine marten.

Another way to gain experience in the sector is by working as a subcontractor, assisting with surveys.  EcoNorth holds a bat survey training event at the start of each survey season which could be your first step towards subcontracting with us.

Finally, as with the beginning of any career, perserverance is essential as there is a lot of competition for junior roles.