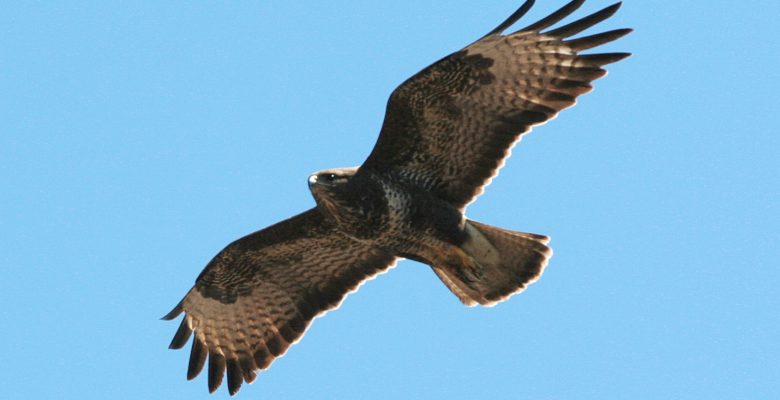 The 15th of March is National Buzzard Day in the US! Although that our American cousins refer to Turkey Vultures as ‘Buzzards’, we thought that it would be a good time to celebrate Britain’s most common bird of prey. Especially as March sees the beginning of our breeding bird survey season.

The start of spring is a good time to see Buzzards pairing off and beginning to nest, as often seen by our ecologists whilst undertaking bird surveys, and in their spare time at the weekends. We’ve gathered ten facts about the Buzzard that you can share with others the next time you see one with colleagues, friends and family!

1  We’ve already touched on the first fact! In the US and Canada, a ‘Buzzard’ actually refers to a Turkey Vulture – the two species are not related and belong to different bird families altogether.

2  Three species of Buzzard can be seen in the British Isles, with the resident Common Buzzard by far the most abundant. Whilst the Common Buzzard breeds throughout Britain, the Honey Buzzard is a summer visitor and very sparse breeder across Britain – around 40 breeding pairs in localities such as the Scottish Highlands, The New Forest, Thetford Forest and South Wales. Finally, a few Rough-legged Buzzards, visitors from Scandinavia may spend the winter in Britain, these usually are found along the east coast.

3  Buzzards can be identified by their gliding flight in which they hold their wings in a shallow ‘V’ shape, with the tail feathers fanned. Buzzards show a wide range in plumage between individuals. Although typically brown with markings, some individuals can be very dark brown with heavy markings, whilst some individuals are almost completely white.

4  A Buzzard calling could almost be mistaken for a cat, with its distinctive ‘pee-uu’ call.

5  Once restricted to the far north and west of Great Britain, recent times have seen fast expansion of the Buzzard’s range and population. Recently for the first time in 200 years, Buzzards bred in every county of England, Scotland & Wales.

6  Buzzards are generalist and opportunistic feeders. Despite a Buzzard’s size, Buzzards generally feed on small mammals, carrion and invertebrates, but occasionally rabbits, small birds, reptiles and amphibians are taken.

7  Buzzards can be found in a range of habitats but tend to be most abundant in a mosaic of habitats encompassing mixed farmland, with woodlands, grasslands and hedgerows.

8  Buzzard pairs mate for life, and generally establish a fresh nest site annually. Each pair can have several potential nesting sites throughout their territory. Buzzards generally nest is trees, however cliff sides and rocky crags have also been used by the species.

9  Buzzards have a habit of ‘decorating’ their nests with fresh green foliage – this includes occasional ‘decorating’ of old unused nests from previous years. It has been suggested that this is to show territorial ownership by the pair.

10  Where EcoNorth is based in Northumberland, Buzzards are now the most numerous raptor to be found.

Click here for more information on the type of bird surveys we offer or why not get in touch and speak to our ornithological specialists who will be able to provide you with detailed advice and guidance?